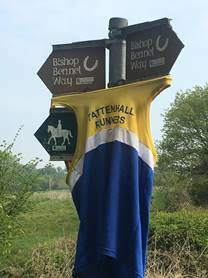 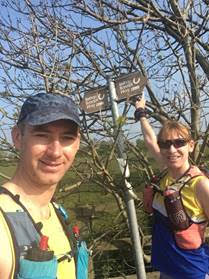 Tattenhall Runners is a very sociable running club, and at this time of year we would normally be meeting twice a week for training on the Sandstone Ridge, as races and other events. The club has a strong interest in fell running, an aspect of which is supporting club members attempting long-distance rounds, such as the Bob Graham Round in the Lake District and the Paddy Buckley Round in Snowdonia. Runners attempt to complete this routes non-stop, and there is often a time limit for completion to be considered successful. The Bob Graham Round is approximately 66 miles with 26 900 feet of ascent (that’s not far off ascending the height of Everest from sea level), so to complete that non-stop within 24 hours is certainly a challenge. The format for attempts is that the round is broken up into legs, and the runner attempting the round elicits the assistance of others for individual legs, who will carry their food and other supplies, navigate, and do their best to keep their spirits up. These events are a lot of fun, with a great sense of camaraderie.

Now as much fun as long-distance rounds are, they are an impossibility from the flatlands of Cheshire, or so we thought! During the lockdown club members have been exploring routes from home, making good use of our daily designated exercise, and have been finding little know paths and coming up with lots of variants on routes. That led to the realisation that there are two long-distance trails in the area that pretty much join up with each other at a couple of points. The Sandstone Trail is well-known and popular with walkers, and there is also the Bishop Bennett Way, which crosses the Sandstone Trail at Grindley Brook and comes pretty close at Beeston, so if you join the loop together it makes a 45 mile round, the Bishop Sandstone Round!

We decided to attempt the round as a virtual relay for Tattenhall Runners. We mapped where everyone who was interested lived, and split the round up into 10 legs, and assigned people to run the leg closest to their house, so no-one needed to travel. Over a weekend we had 48 hours to complete the round, with people allowed to run their legs at any point during that time, to hopefully accommodate all household circumstances. Through the weekend everyone posted uploaded photos of their runs onto Facebook, and recorded their runs, and we successfully completed the virtual relay in 5 hours and 52 minutes, with 18 club members taking part.

The event was a lot of fun, and it definitely generated the same team spirit as previous weekends away, though many of us are still pining for the hills of Wales!