The arrival of Coronavirus to the UK and the subsequent lockdown has had a huge impact on competitive and recreational running. It has led to the appropriate cancellation of races, and limitation on travel means that we’ve had to become more imaginative in our local runs to keep all of our morale up in these unusual times.

It has been remarked that the social isolation may not only have affected some peoples running fitness, but in some cases may have warped their imagination leading to some rather creative running challenges.

At the end of March 2020 we were asked to only leave home once a day for exercise. This led to the birth of the two kilometre garden challenge. The aim of the game was to run two kilometres without leaving your own property (not including fields). Many Tattenhall runners embraced the challenge with family members getting involved too. Lawns definitely took a beating and most of us ended up a bit dizzy, but lots of fun was had by all. The longest offering was 10km of garden laps, and the Easter Special edition has convinced many young neighbours of the authenticity of the Easter Bunny rumour. 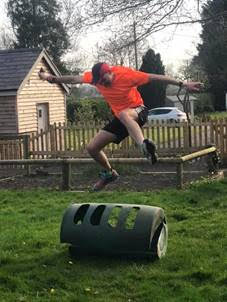 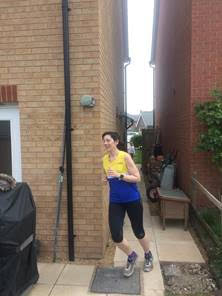 With everyone settling into lockdown it became increasingly evident how serious the situation was, especially for key workers and within the NHS. The challenge was for Tattenhall runners to show their appreciation for the nurses, doctors and health care professionals by signing their Strava GPS records with the letters NHS.

Due to lockdown all of us have been running from home, rather than our traditional stomping grounds of Welsh Hills or the Peak District. This has impacted the normal climbing training, which was addressed by the next challenge – The 1000m Lockdown Climbing Challenge. The creatively-named challenge was to run from home to the Sandstone trail ridge and achieve over a 1000m of climbing in a single outing without repeating routes. Ten Tattenhall runners gave this a go which was fantastic, although we all found this a really tough especially in the heat. Five runners managed to get over 1000m of ascent during their runs with Rob Arden achieving the largest total at 1338m.

The Lockdown challenges keep coming. Next up is Emma’s Virtual Tattenhall John O Groats to Lands End relay. The club is aiming to achieve a cumulative distance of 1407km over one week – every run will count towards the final total and every member can contribute. There will, of course, be the now-famous certificates from Simon for notable contributions (not necessarily longest distance!).