I have been training for the last 6 months for a 100 mile ultramarathon which was due to take place at the end of May, but has now of course been cancelled. Rather than let all my hard work go to waste, I have decided to challenge myself in a slightly different, but much safer, way and run my very own Backyard Ultra. A 100 mile race is very well supported, with race marshalls, medics, checkpoints, food and drink. In training, you don’t run anywhere near that distance, so there is a real “facing the unknown” element on race day – can you actually run that far? How will your body react? Reactions can be extreme – hallucinations, vomiting – it’s all part of the fun, but it wouldn’t be sensible for me to attempt this on my own with no proper race support.

So I recently came across a fairly new kind of race called the Backyard Ultra, invented by Lazarus Lake (of Barkley Marathons fame) where runners set off on the hour to run a 4.167 mile loop. They can be as quick or slow as they like, using any remaining time of that hour to rest, eat, drink and stretch – but they must be back at the start line ready to set off again when the clock strikes the next hour, and the next, and the next…. The race is won when only one runner finishes the loop – with elite runners, this can be after 50 or even 60 hours! I didn’t expect to last that long, but I’ve been training for long distance running so I could have a good try at getting at least 50 miles. I planned out my food and rest strategy and listened to as many running podcasts on the subject as I could to get advice and ideas. It’s such a different way of completing a distance, I actually couldn’t wait to start! 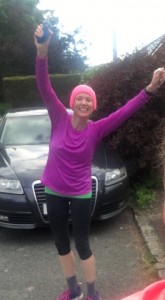 I started early on Friday 15th May to make the most of daylight hours and I was really excited. I picked an out and back route down Birds Lane which is quiet and flat, and I planned to update my friends and family during the day with how I was getting on. As an added incentive, I was raising money for NHS Charities which supports NHS workers and their families – so important right now of course. It was went really well on the day, the weather was prefect – cool and quite still, and I just had a great time. A friend ran a few loops with me, and so many friends came out to clap and her as I ran past each hour. My parents even drive over from Whitchurch to cheer me!  My husband Steve crewed me, shovelling food down my neck and pushing me out the door with a filled drinks bottle on the hour. As time went on, I lost my appetite, and my ability to make decisions, so he had to be quite firm with me. I eventually called it a day after 12 loops and 50 miles.  It seemed like a good place to stop!

I’m recovering well, and hoping to do another in July – the worldwide virtual Quarantine Backyard Ultra. And I’ve raised a whopping £780 which I’m so pleased with.